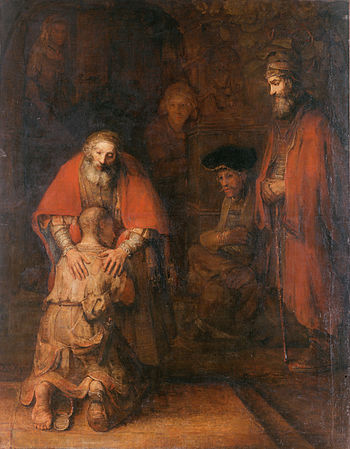 We’re in the middle of a sermon series this Lenten season at our church. This morning was the second week of the series focused on the parable of the Prodigal Son. The overall series is a look at at the characters, and as is often the case, it begins with the younger son. You know the one. The one we prodigals identify with if we have traveled a path that led us far from God.

I have written before that of the parables. This is probably my least favorite, simply because I think we often miss the point. Also because it is hard to do well. This is one of those stories in the Bible that we have known since childhood, the idea of which permeates our culture. The word prodigal has come to mean one who returns home after wandering, or simply one who wanders. It is a story that is hard to make new. And I have to say, the pastor did a pretty good job of bringing it to life this morning.

He highlighted the connection to our modern lives of wandering, that sometimes entail distant travels, but as often entail spiritual running away even as we never budge from the same place physically. Even as I have come to seek insights in this passage less, I have always identified first with the wanderer. The first three-quarters of my life were pretty much made up with wandering. First as a Navy brat, where home was my immediate family and had no set place. Where my father was often off on distant shores, held in memory and known through exotic little gifts and beautifully scrawled words on paper or the back of a pretty post card.

Later, that wandering continued, as I set out to run away from home. It didn’t seem like running at the time, but that is what it was. A searching for the next adventure and the space to be my own person. Even when I briefly came home, it wasn’t long before I was off once again, running from Virginia to the far off land of Georgia, where I finally came to rest, at least physically. The trouble is, it took another ten years or so before I finally, really, truly came home. Ben did a nice job of evoking those memories, and all the ways we wander this morning, with his own tales of adventure, and the realization that the searching isn’t so much for a place but for something to fill up the space designed as God’s dwelling place in us.

Even if it’s not my favorite story, and even if I see a piece of all those characters in myself now, where once I only saw that wayward son, a reminder of the road we have walked before is good. If we don’t remember that past, it is easy as the world grows loud and life distracts us, to find ourselves once again looking off to the distant horizon wondering what might be over that far off hill. But, as with any good sermon, there was a moment where it sparked a thought. A not quite disagreement, but more an idea that needed more context. It came toward the end, as Ben directed our eyes toward a painting of the younger son, on his knees, disheveled and distraught with his head buried in his father’s waist.

Ben encouraged us to look to the world around us for those disheveled souls, those prodigals. The gaunt, the strung out, the lost and wandering. To pay attention and reach out for them. All I could think was we need to be careful with that. Not that we need to be careful because of a danger from them. But, because we can be a danger to them if we are not careful. A stumbling block in their path back home. I know, a little crazy. Hans Sebald Beham engraving of the parable of the Prodigal Son with his pigs, 1536 (Photo credit: Wikipedia)

But, it struck me when those words hit my ears that we prodigals all like to see that younger son in ourselves. And when we do, we almost always see ourselves in that moment of return. Rarely do we see ourselves still sitting firmly in the pig pen longing after pods. I firmly believe we are to be a light to the lost and destitute. I firmly believe God calls us to keep our eyes open for His broken and hopeless prodigals. He entrusts us to offer them the hope of Christ. But, if we are going to do that effectively, if we are going to lead them home, we first have to make sure we are indeed still on the path heading toward our Father, and not off on our own tangent to a far off land.

Where Are You Standing?

So, I guess my question for myself, and for all of us tonight, is are you home where you belong? Have we returned to our Father’s house, penitent and prepared to be His servant? Are we still safely within His holdings? Or have we once again wandered out into the world? And if we have wandered, which isn’t always bad (many of the disciples wandered the world), why have we wandered from home?

Is it simply a physical wandering because Father has sent us somewhere, to seek the lost and serve the world? Or has worldly love once again enticed our hearts, love promising fulfillment but leaving us empty and aching? Being salt and light in the world is part of the mission. But, let us take a moment tonight, and every night, to assure our firm connection to our Father. Otherwise, we will simply be the blind leading the blind further from the Father waiting to receive us home.