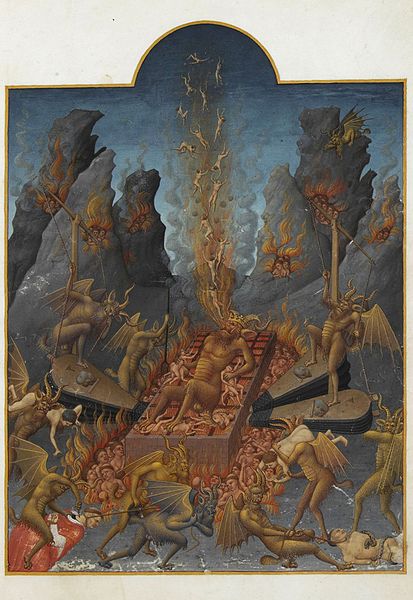 And for my next trick, the question of Heaven and Hell, and how could a loving God condemn people to an eternity in such a heinous place just because they don’t do what He says. Forgive me if I get a little quirky or irreverent in my discourse, I get to talk about God, and He gave me a sense of humor. No offense meant if something I say comes across weird. This is an honest attempt to answer the question of heaven and hell developed from quite a number of conversations over the years with others who had the same concerns and a lot of reflection and study.

The Bible does not say a lot about hell. It talks about it in passing reference in various spots, and gives some pretty colorful descriptions of Armageddon in Revelation, but it doesn’t give a clear picture of what exactly hell is. We must view imagery used, just as the rest of the Bible, with an understanding of the context and the audience. The Bible was written in a time, even the most recent parts of it, when people really did not have the technological capability in either their tools or philosophy to understand a concept such as hell. They barely had the concept of earth down. This was well before we recognized the world as round in most societies. We did not have the concept of how vast the world was, how vast the universe was or what all those lights in the sky might possibly be.

When ideas needed to be communicated to the people, if they were to be understood at all and not just known, they had to be communicated in a way that the people could relate them to things they knew and understood. Thus, the descriptions of what hell might be like generally involved fire, torture, and agony.  The picture painted is of the most inhospitable, barren wasteland type place that the folks of the time could imagine. If we wrote the Bible today, it might have descriptions like the surface of the sun, or the moon, or being in the middle of the Sahara naked. However, if you look at what the Bible really talks about when it is not giving vivid descriptions of torture, it essentially says hell is a place across an abyss where God is not.

It then tells us we can choose to be where God is or where God is not, and the consequence of being where God is not is miserable. One of the most basic premises of Judaism and Christianity, but particularly Christianity, is that when God created us He limited himself in order to allow us choice. He made us with the capacity to do both good and evil. He made us in his image and placed in our hearts the template for doing good. Ultimately, even though He COULD force us to choose good and to love Him, He chose not to.

God is also a logical God. He created the world to work a certain way, when we do good we work in harmony with all the little bits and pieces of His plans and the consequence of the decision to do good is a good consequence. In a logical world however, the opposite must also be true. If we choose instead to do evil, the ultimate consequence of our choice will be bad. It is similar to physics and the concept of equal and opposite actions and reactions. It is part of the immutable laws of the God’s universe. We cannot change the laws of physics, but we do have the option of understanding them and learning how to use them for our benefit. The same is true of God’s other laws. Part of the laws of the universe God created, according to the Bible, is that sin cannot exist in the same place He does.

Now we come to heaven, hell and the dire warnings of the Bible, and back to the parenting theme of the last piece. If you loved your children and you wanted them to grow into mature members of your family, would you do everything in your power to warn them about the natural consequences of actions that would permanently remove them from you? Would you tell them not to drive drunk, or jump off a bridge? Would you tell them not to disrespect you because you know it will not stop you from loving them, but it could stop them from loving you? Knowing that eventually your children will become adults who are free to make their own choices, would you be explicit in explaining how to make good choices and the consequences of bad choices, not because you said so, but because that is how the world works? The rules laid out by God and the descriptions of hell and damnation are exactly the same thing. They are a guide to us on how to “do good.” A revealing of the horrible consequences if we, of our own volition, instead choose to do evil.

For the world to hold together, God’s purpose for it to be served, and for those who choose to do good to prosper, there must be an underlying order to it that is unchangeable, even by God. Not because He does not have the power to change it, but because a just God cannot change the rules on a whim and still be just. He laid out the universe, He created mankind with free will, and as any good parent would, He taught his children the rules of the universe they live in and the consequences of breaking them. Early on, He gave them many rules to protect them from their ignorance, as parents do with children. As the species matured, He extended the boundaries out a bit at a time to allow them to grow. Once they learned enough, He gave them full freedom to make the choices between good and evil.

A simple choice, accept the knowledge that we are still growing and cannot fully comprehend all the ramifications of our choices. Accept that this limitation makes us incapable of avoiding evil on our own. Accept that He loved us enough to become a perfect man as both template and sacrifice to atone for the evil we do. Accept that sacrifice to be our guide in doing our best to do good and not evil in our future choices, and to do so because we love Him. If we choose to accept that gift, then our love of Him guides us to keep us free of purposeful sin, and His love of us washes clean the sins we could not see when we face our final breath here on earth. He gave us this so we can exist in the place He is.

On the other hand, we can reject that offer and choose instead to go our own way. We will inevitably do evil, not necessarily because we are evil (although there are a few who have been), but because we cannot see the evil that we do until it is too late. Without Him, we cannot find our way back from it. When we die our earthly death, it is by our own choice that we have decided not to love God. In that rejection, because He promised us the choice, we have forbidden Him to wash us clean and left our sins in place. Sin cannot exist with God, and if we refuse to let Him get rid of the sin, neither can we, so we are stuck in the place where God is not. Moreover, perhaps this is the most important part I ever came to understand, because He loves us still, God weeps.